Today is my favorite day of the expedition so far.  It’s 18:00 and I just came back into  the tent. I had to take a bathroom break, and walking back around the corner of the rock outcropping, I was shocked by the beauty laid out before me – for the second time today.  The summit of Aconcagua raises 1500m above us, the rock of the peak striped multi-colored in the evening sun, and with the deepest, most breathtaking deep blue sky as a backdrop.  It is jaw-dropping, how clear the air is, how every detail stands out on monuments that are many km away. Everything seems within an arms-length grasp – the summit, the glaciers, the far-off penitentes, the stars in  the night sky (and I have never before seen so many or such bright stars as I do here).

We are at NIdo de Condores and despite the 5400m elevation, I am still feeling good. I made a decision 2 days ago to invest the extra money for a private porter for today only.  Given my health struggles, it seemed a wise thing to do; today was our heaviest load day and it was a long climb.  I am so glad that I hired the guy!  The difference between carrying over 20 kg and carrying only 8-9 is tremendous.  As it is, we arrived and I had energy in reserve, so that instead of collapsing exhausted into the tent, I was able to enjoy the surroundings. 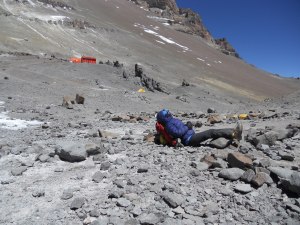 First by building myself a recliner to sit in the sun, eat my sandwich and relax. Then I walked with Bernie to the tiny frozen lagoon that comprises the water source for this camp. 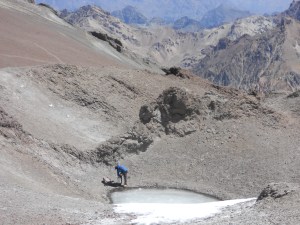 While he hacked ice and filled water jugs, I hiked over to the far ridge and was awarded with a breathtaking view over the culmination of the Vacas valley sweeping up to the north side of the mountain, hosting the Gussfeldt glacier hanging off the valley sides (named for one of the premier early Aconcagua explorers, who despite giving it everything he had, did not manage to summit).  I then found a perfect perch on  a rocky outcropping overlooking the surrounding mountains (we are now higher than almost every other peak in the vicinity), waited for Bernie and walked back to camp with him; as he was loaded down with 40L of water, we were moving at similar speeds. (In case I’ve neglected to mention it thus far, guiding is not an easy job.)

Our tent organizing and settling in took about 45 minutes, I massaged anti-inflammatory cream into my still-troubling tendons, read for a while and then enjoyed a quiet power nap.  It’s cold here now.  In fact, as soon as I awake this morning (still in camp 1), I knew it would be a cold day.  I could see my breath – without even getting out of my sleeping bag.  I’ve been climbing in my merino wool base layer (which is awesome – thanks mom!), a fleece, and hard shell.  By the second rest stop today I had to add my down jacket and exchange liner gloves for insulated ones.  To be honest, I don’t remember a great deal about the hike itself.  There were a couple of dicey areas over steeply inclined rock, where only the very edge of my boot sole had purchase – again, hurrah for not having to manage those balancing acts with a fully loaded pack.  We also crossed a frozen river a few times.  Other than that…well, let’s just say that mountaineering is a very meditative sport.  The constant, slow, deliberate steps up the side of a mountain are very conducive to mind wanderings. Some meaningful, some entertaining, sometimes endless loops and very often not even fully part of your consciousness.  I cannot tell you  what my wandering were for at least half of the trekking time today.

Just for fun, we measured my O2 saturation and pulse this morning before rousing ourselves out of our sleeping bags.  I’m happy to report that I was still at 86 and 80 respectively – not bad after a night at 4900m.

Bernie just came back from a visit to the rescue patrol, who are stationed here at Nido (in addition to their station at Base Camp).  I didn’t mention it earlier, but 2 days before our summit push commenced, someone died at 6500m; heart attack, apparently.  I asked Bernie what happens to the body in such  a situation, given  that the helicopter can only fly up to 5400m.  Plus, the heli has been out for a few days due to mechanical issues and waiting for a new part.  Rescue patrol collected the body, and carried it down here to Nido – it is now hanging out next to their hut, until the heli is flying  again and can pick it up.  Still better than in earlier days, Bernie reports – rescue patrol used to have to carry bodies all the way down to base camp.  And now: don’t you feel just ta little bit better about the contents of your job?! 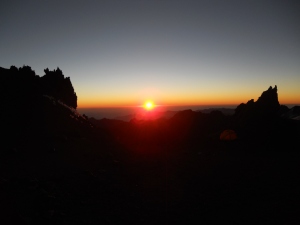 Jaimi is a former business exec, who left the corporate life to follow her passions: travel, adventure, and sharing her experiences.